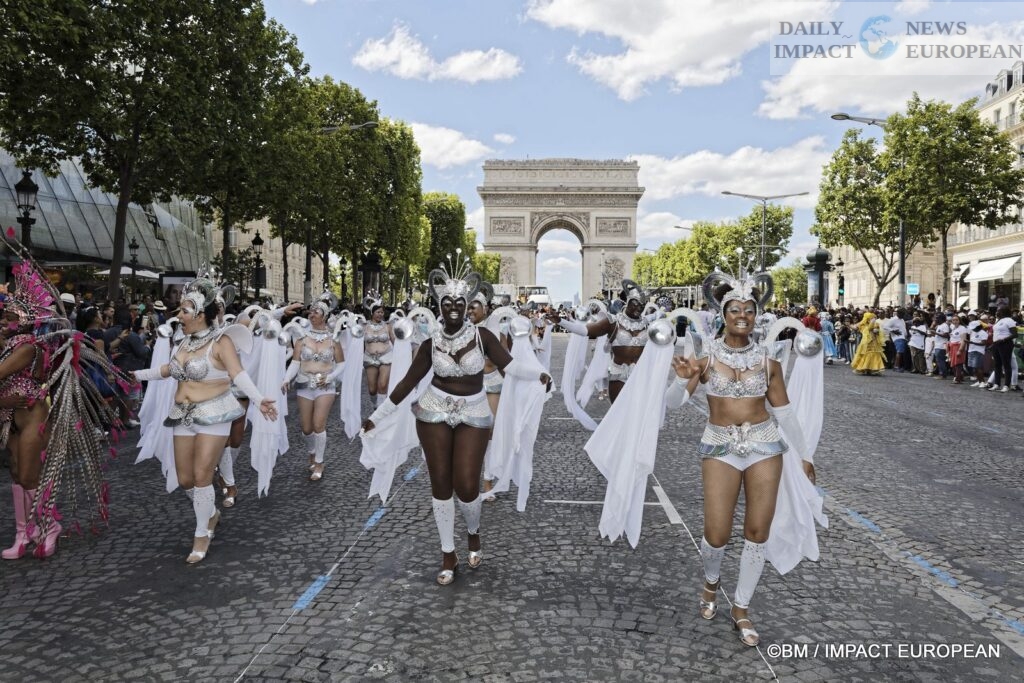 Long awaited by Parisians and tourists, the Carnival Tropical was back in Paris on July 3, 2022 on the Champs Elysées, welcoming 25 groups.

After the cancellation in 2020, due to the pandemic, and a 20th anniversary at the Charléty Stadium the following year, the Carnival Tropical has regained its place on the most beautiful avenue in the world.

It was an opportunity for the 25 groups and 1,800 festival-goers from associations in Paris and Île de France to discover new choreography, new music and new costumes in the colors of the flag of Europe, chaired by France during the first semester.

The Carnaval Tropical de Paris was created 20 years ago by West Indians and Guyanese from metropolitan France. Today, it brings together carnivals from the Caribbean, Guyana, the Indian Ocean, the Pacific as well as Latin America (Bolivia, Colombia, Brazil or Haiti…).

The parade left at 1 p.m. from the Champs Elysées roundabout in the direction of rue Tilsitt, then returned to the starting point where a jury of Guyano-Caribbean carnival specialists awarded the prizes, including the Grand Prix du Carnaval Tropical. To this end, each of the groups had to perform a 3-minute performance in its category pre-defined by the Carnival Federation of Paris and Île-de-France. Following this, the royal family (Rein-mother, Queen, King, Mini-Rine and Prince) were introduced.

The groups had to parade on the theme: “The Overseas: Europe of the 3 oceans” (Atlantic, Indian and Pacific). They could use all the extravagances in their interpretations and performances, showing the jury, the artistic know-how, the traditions and the Creole culture.

At the end of the parade, a reward was given in each category including the best group of musicians “mass”, “cash or “Apo” and even “best costume”, best choreography, best performance.
Like every year, we discovered a new royal family.