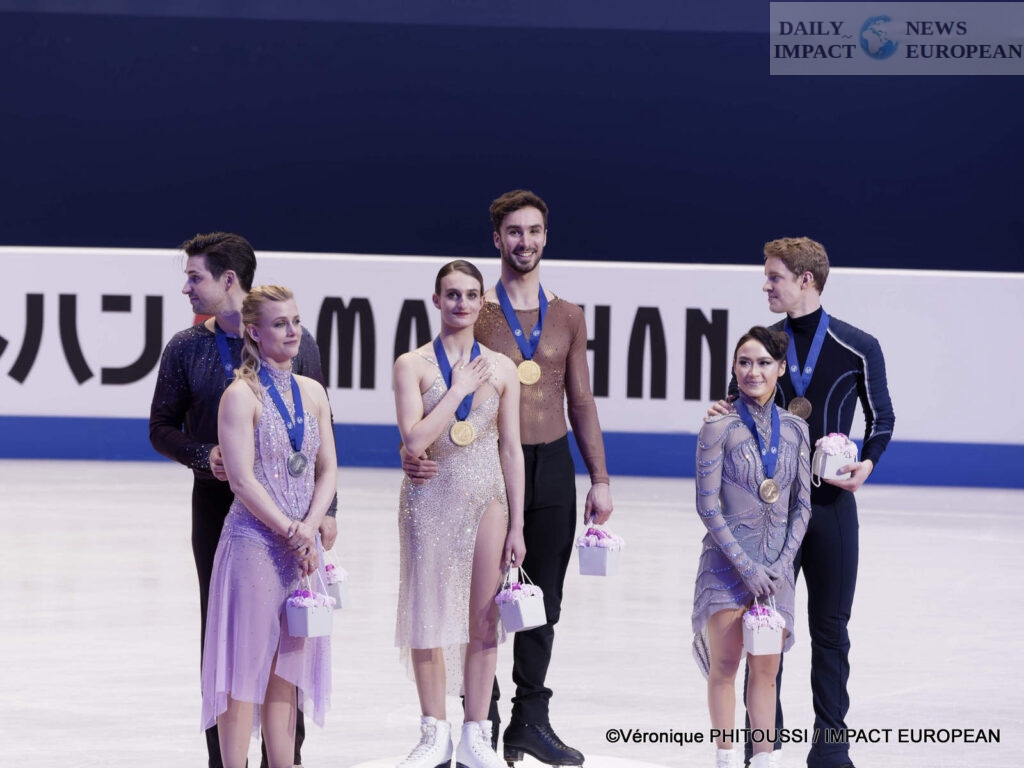 On the podium, Gabriella PAPADEKIS and Guillaume CIZÉRON were crowned with success. The Couple also bettered their own free skating world records (137.09) and "cumulative score" by (229.82). They are the first five-time French skating world champions.

The French Gabriella PAPADEKIS and Guillaume CIZÉRON won a fifth title at the world figure skating championships on Saturday in Montpellier.

In total, this is their eleventh international title, five world titles, an Olympic title and five European titles.

On Saturday March 26, Gabriella PAPADEKIS and Guillaume CIZÉRON, participated in their seventh World Championships, they have won four in the past. They had seriously resumed training after a Parisian media tour and galas in Switzerland.

On the podium, Gabriella PAPADEKIS and Guillaume CIZÉRON were crowned with success. The Couple also bettered their own free skating world records (137.09) and “cumulative score” by (229.82). They are the first five-time French skating world champions.

Gold reached out to them.

Remember that the dancers are the only Olympic champions from Beijing to have made the trip for these World Figure Skating Championships. Romain Haguenauer, their coach for ten years, wants “they win but enjoy the public, and finish the season well and maybe their career”. For the coach, “it’s always fascinating to skate at home”. After their victory in Beijing, the coach thinks that “if they win, the French must have fun and if they end their career, they will not have a better end to their career than winning at home, at their home “. But, he would also be happy if they continue.

For Gabriella PAPADEKIS, “it’s a way of celebrating our title with the public, with our family, we don’t think of anything else than that”.

The Skaters had been deprived of competition in 2020 in Montreal (their adopted city since 2014) because of the first confinement.

We must not forget the absence of Russian and Chinese couples during this competition. The Russian couple Victoria Alexandrovna Sinitsina and Nikita Katsalapov were not invited because of the war in Ukraine, this couple had beaten them in 2018 at Euro 2020.

Thanks to their work and talent, they became the second most successful dancers at the Worlds with this fifth gold medal. Only the Soviets Lioudmila Alekseïevna Pakhomova and Aleksandr Gueorguievich Gorchkov were crowned 6 times in 1970, 1971, 1972, 1973, 1974, 1975.

Gabriella PAPADEKIS and Guillaume CIZÉRON greeted the organizers of these Montpellier Worlds. The crowd was on their feet cheering the champions who skated with the French flag on the track in a lap of honor.

Romain Haguenauer, Gabriella PAPADEKIS and Guillaume CIZÉRON as well as the Montpellier public were able to enjoy these moments of grace. The atmosphere was magical.

These two grew up together. A mother trainer in Clermont-Ferrand had the idea of ​​having them skate together when they were 8 and 9 years old. They learned to skate together, they know each other perfectly. “Their disagreements are rare and they rarely leave the rink.”

Nathalie Péchalat, president of the French federation “would be very happy if they continue because “they bring a lot to the French team and to our disciplines”.

The French couple Gabriella PAPADEKIS and Guillaume CIZÉRON won everything, does he still want to continue?

The public is waiting to know the personal decisions that our world champions will have taken with regard to their professional future.