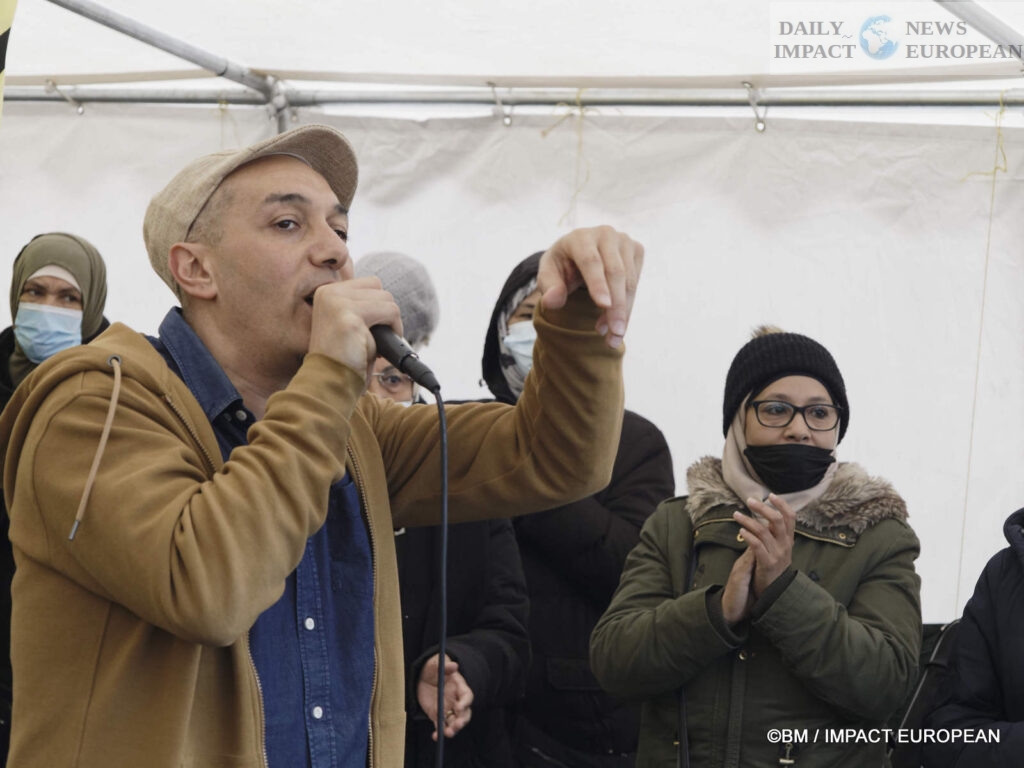 Action of the DAL

Since March 5, the “forgotten of the DALO take turns day and night Place de la Bastille to obtain a serious commitment to rehousing and stable and decent accommodation for homeless families awaiting rehousing. They also demand the suspension of the evictions of families threatened.

The action continues despite the bad weather and the presidential elections. They don’t drop anything!

The DAL (Right to Relocation association) supports families. in danger. Together, they were received by the Prefecture of Paris-IDF, then at the Ministry of Housing but without result to date.

What is the DALO law?

According to the DALO law (Right to Opposable Housing), the Prefect must relocate a validated household, after examination of its situation by the departmental commission, within 6 months, in application and respect of the said law.

A solidarity ball organized by HK

Saturday April 9, HK (Kaddour Hadadi) and his group “Les Saltimbanks” organized a ball for the “Forgotten of the DALO”. He called on Parisians to come and join him in Place de la Bastille at 1 p.m. sharp to sing and dance in support of the 200 families who are homeless, very poorly housed or awaiting eviction.

For this united and fraternal moment, he evoked the words of Abbé Pierre: “To govern is first of all to house your people!” and invited the participants to bring their instrument to play with him on his titles: “Dancing again”, “Tell them that we love each other” or “We don’t let go”.

Kaddour Hadadi or HK is a “world citizen acrobat” as he defines himself. Born in September 1976 in Roubaix (59) in the Potennerie district, this son of Kabyle immigrants, fruit and vegetable merchants, and grandson of a soldier from the First World War, made himself known when he is 15 years old and sets up his first group “Juste cause”, connected by hip hop.

Between 2005 and 2009, he formed the group “Ministry of Popular Affairs” (MAP), hip hop with an accordion and a violin. They released 2 albums: “Debout là-dedans” in 2006, the year they were “Révélation du Printemps de Bourges” and “Les Bronzés font du Ch’ti” in 2008. They also gave many concerts.

It was also in 2009 that he formed the group “HK and the Saltimbanks”; they write songs along their travels on the roads. This is how the first album “Citizen of the World” was released at the end of January 2011. It includes the title “We don’t let go of anything”, then taken up in the demonstrations but also in the film “La vie d’Adèle”.

In 2012, the second album, “modern times”, was released, in which he paid homage to Stéphane Hessel, a great resistance fighter he met in 2010. There is also a cover of Jacques Brel’s title, “Amsterdam” as well as only titles with many invited friends like Flavia Coelho, Karimouche, Souad Massi and an appearance by the entire MAP group.

The same year, HK published his first novel, “I write therefore I exist” (ed. Riveneuve), an auto-fiction in which he talks about his hometown, Roubaix.

In 2013, he presented the album “Les Déserteurs”, in which he performed classic French songs in a châabi version (Padam Padam, Toulouse, Les P’tits papiers, Vesoul, Né somewhere, Le Plat Pays, L’ Red poster, Les Passantes, Under the sky of Paris, The Song of the old lovers)… .

On November 30, 2015, he was among the signatories of the Appeal of 58: “We will demonstrate during the state of emergency”.

In 2017, he signed the music for the documentary film “I walked up to you”, stories of an exiled youth, directed by Rachid Oujd who also directed the clip. It includes the titles “I walked to you” and “Refugee”.

Moreover, due to his commitment to the left, his song “We don’t let go of anything” becomes a campaign anthem. He also released a 3rd book “The heart at work in 2017.

2020 is the year of his 4th book, “Without hatred, without arms and without violence”. The same year the album “Petite Terre” appeared. During the pandemic, he had to cancel a show with his group because it was declared “non-essential”. He then created the song “Danser encore” which was taken up abroad (Germany, Italy) and became the anthem for the opening of culture.

A flashmob takes place in March 2021 at Gare du Nord and Gare de l’Est in Paris. It is then found in gatherings in France and Europe. This will cause controversy. He also decides to cancel concerts during the summer of 2021 because he is opposed to the health pass during shows for ethical reasons.

Tags: albums anthem for the opening of culture Books châabi concerts DAL DALO law expulsions flashmob HK Kaddour Hadadi left Revelation of the Spring of Bourges solidarity ball for the forgotten of the DAL the Saltimbanks