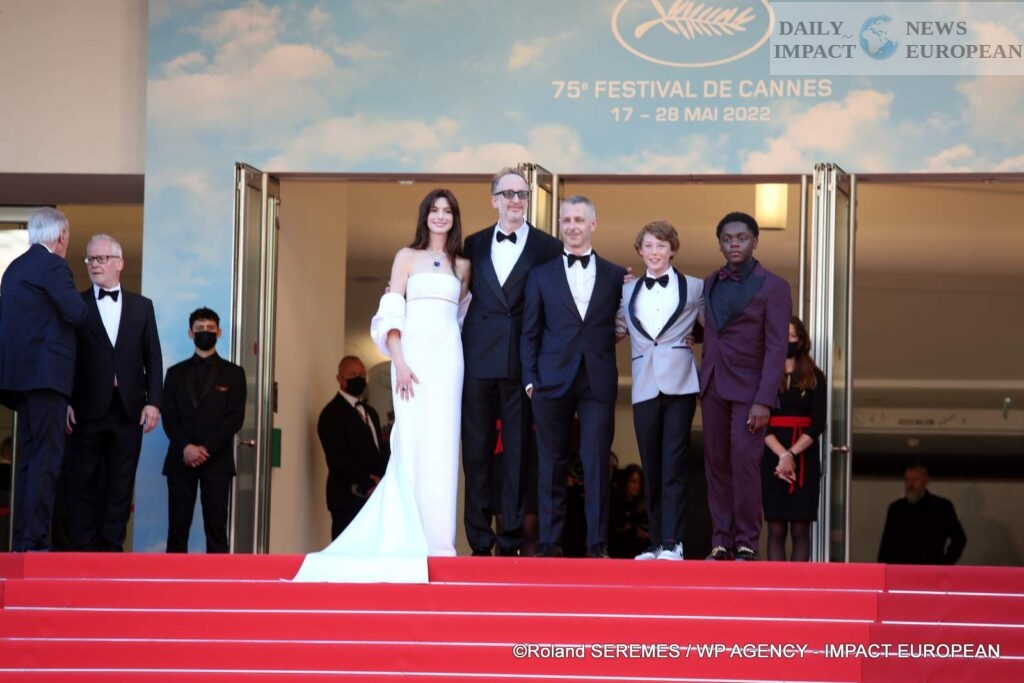 Anne Hathaway and Jeremy Strong climbed the steps of the 2022 Cannes Film Festival for the screening of Armageddon Time, by James Gray.

Anne Hathaway and Jeremy Strong climbed the steps of the 2022 Cannes Film Festival for the screening of Armageddon Time, by James Gray.

One of the most anticipated films of the competition was shown tonight at the Cannes Film Festival: Armageddon Time, by James Gray. The director of Lost City of Z and Ad Astra tells a personal story, that of a young boy (Michael Banks Repeta) evolving in the artistic milieu of Queens, New York. There he will cross paths with several characters embodied by Anne Hathaway, Anthony Hopkins or Jeremy Strong, who will have a more or less good influence on him. If at 84, Hopkins did not make the trip, the rest of the cast climbed the steps alongside the filmmaker, who admitted in the summer of 2020, just before shooting it, to have been inspired by the cult works of Federico Fellini and François Truffaut for this project which was close to his heart: “Amarcord and Les 400 coups are certainly films that I have thought about a lot and Armageddon Time is in keeping with the spirit of these works – it is a very open, warm, human, which makes you want to love the people who live there.”

Vincent Lindon, the president of the jury, led the way, closely followed by the Rodeo film crew. For a moment, the Croisette couldn’t take her eyes off Aishwarya Rai’s airy dress, followed by Cindy Bruna’s voluminous pink tulle outfit. Aya Nakamura and Kendji Girac also posed under the flashes. A few minutes later, Thomas Pesquet, already present the day before, again testified to his love for cinema. This time, the astronaut lent himself to the game of autographs as soon as he arrived. Rebecca Hall and designer Alexandre Mattiussi followed suit.

Around 6:45 p.m., the Croisette was lit up with a legendary smile: that of Julia Roberts, godmother of the Chopard trophies. The actress, who last climbed the steps in 2016 for the screening of Money Monster, this time sported a jumpsuit tailcoat (and heels, after her previous barefoot appearance). She savored this time alone in front of the photographers who asked for more. Ten minutes later, Jeremy Strong, “honored”, walked the event red carpet for the first time.

Anne Hathaway offered herself a sparkling appearance, in a bra and sequined skirt, in the arms of two children: Banks Repeta and Jaylin Webb, also actors in the film. The actress then entered the auditorium, arm in arm, with Jeremy Strong. Before the team attends the screening of the feature film side by side, like a family.

Even as she has become an inescapable face of American cinema, it was her first time in Cannes. The American actress, discovered in the role of a young novice a bit lost in the fashion world in The Devil Wears Prada in 2006, has shown us here that she now masters the codes of style.